The UIP test cases are the P_4 series, starting with P_4_1_001. These tests act as a sometimes well-behaved and sometimes badly-behaved host to perform various actions like loading, unloading and activating the UIP under test in various sequences. The test cases evaluate the response of the UIP to these various sequences to determine a pass or fail verdict for each given test.

The set of UIP test cases in the DPCTT can sometimes pass or fail inconsistently from one run of the test campaign to the next, depending on the behavior of the UIPs in the package under test, as well as the previous history of test cases run.

Sometimes the UIP under test does not exit cleanly after a test case, leaving all or part of the UIP in memory and the UIP itself in an inconsistent state before the start of the next test case.

The best way to get a good idea if your UIP will pass the UIP tests is to run the UIP test cases one at a time.  This allows the DPCTT to fully clean up the test-running process between each test case.  Otherwise, DLLs on which the UIP is dependent can sometimes stay loaded and cause false failures in the later tests.

To run a test in the DPCTT individually, right-click on the name of the test case itself in the left-hand pane of the test tool. From the pop-up menu, select "Execute selected test case" 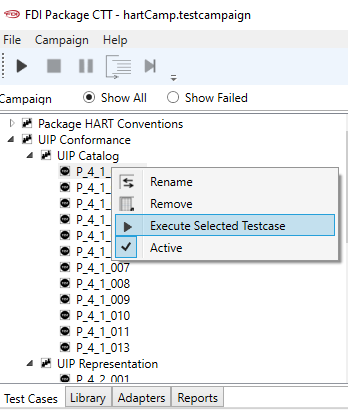