FDI Common Host Components (FDI CHC) were developed to provide host tool developers with a starting point of common functionality to ease the adoption of FDI. The FDI CHC provides the UI Engine, EDD Engine (EDDE), and Device Model Services (DMS) which form the common core of an FDI host.

Originally the FDI CHC were developed for the Microsoft Windows platform with support for FDI package UIPs in .NET. This evolved to UIPs in HTML5 which eases the portability to non-Windows operating systems.

The EDDE is used in the FDI-IDE Reference Run-time Environment (RRTE) and other tools and is available as source code for incorporation into non-Windows host tools. For Windows-based systems, the FDI CHC is the best option since it includes all the Windows-based code needed to integrate FDI into a Windows-based host. 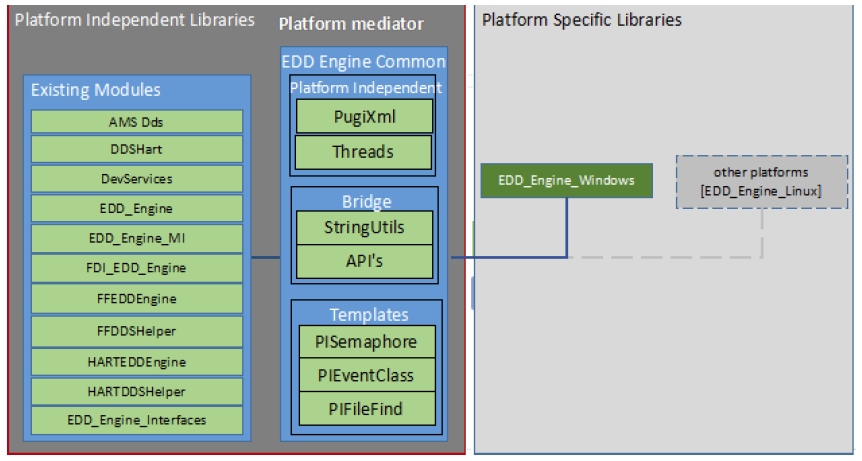 There are standard test cases for the Windows-based FDI CHC. The EDDE is also fully integrated into the FDI-IDE RRTE which is currently a Windows tool. Companies have successfully used the EDDE on other platforms.

The following diagram illustrates how the Windows tests are applied to the EDDE. These can serve as a basis for non-Windows OS testing. The overall implementation must pass the FDI Host Test which in turn checks the overall conformance of the tool.

The FDI CHC and ported EDDE are both available from the FieldComm Group.

The ChangeLog and DataSheet for the EDDE are available here.